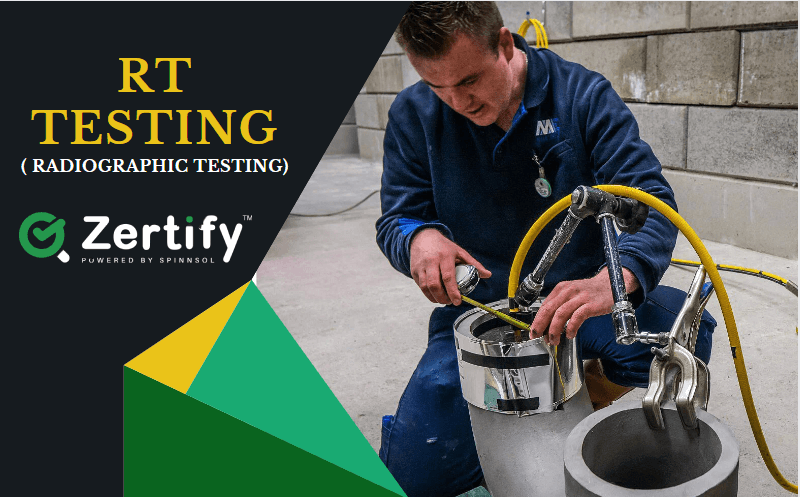 Some of the typical uses are detection of surface and subsurface features of interest in welded parts, castings, forgings, wall thickness measurement, detection of blockages inside sealed tools, detection of reinforcing material in concrete slabs, calculating the bulk density of materials, measuring porosity in concrete, etc. Conventional film radiography is the most liable test method. On the contrary, digital or computed radiography has specific advantages over conventional film radiography. We will discuss this in detail. Let’s Read on!

So what is RT testing or Radiographic Testing technique in NDT?

What is RT Testing?

Radiographic Testing (RT) is a nondestructive examination (NDE) technique that involves the usage of either x-rays or gamma rays to view the inner structure of a component. In the petrochemical industry, RT is usually utilized to inspect machineries, such as pressure vessels and valves, to notice flaws. RT is also used to examine weld repairs.

Compared to other NDE methods, radiography has various benefits. It is highly reproducible, can be utilized on a variety of materials, and the data collected can be stored for later analysis. Radiography is an effectual tool that needs very little surface preparation. Moreover, many radiographic systems are movable, which permits use in the field and at elevated positions.

Zertify NDT Software streamlines a fast, accurate, and compatible NDT work process from initial Planning, Scheduling, and Execution to delivering real-time access to inspection data. It is perfect for reporting and documentation of All NDT Methods

There are multiple types of RT techniques including conventional radiography and numerous forms of digital radiographic testing. Each works slightly differently and has its own set of benefits and drawbacks.

Conventional radiography uses a sensitive film that reacts to the emitted radiation to catch an image of the part being experimented with. This image can then be inspected for evidence of damage or flaws. The most significant limitation to this technique is that films can only be used onetime and they take a prolonged time to process and interpret.

Unlike traditional radiography, digital radiography doesn’t need film. Rather, it uses a digital detector to show radiographic images on a computer screen almost instantaneously. It allows for a much shorter exposure time so that the pictures can be interpreted faster. Furthermore, digital images are much higher grade when compared to traditional radiographic images. With the power to capture high-quality images, the technology can be used to determine flaws in a material, and foreign objects in a system, inspect weld repairs and inspect for corrosion under insulation.

Which are the major utilised Radiographic Testing in oil and Gas Industries?

Image quality is fine but can be improved using appropriate tools and techniques (i.e, adjusting contrast, brightness, etc. without compromising integrity). It’s essential to know how tools, such as changing contrast, affect the image. Care should also be considered to make sure minor defects are not hidden after enhancements are completed.

Direct Radiography (DR) is also a form of digital radiography and is very comparable to computed radiography. The major key difference lies in how the image is caught. In DR, a flat panel detector is utilized to instantly capture an image and show that image on a computer screen. Although this technique is swift and delivers higher quality images, it is more expensive than computed radiography.

Real-time radiography (RTR), as its name implies, is a form of digital radiography that happens in real time. RTR works by ejecting radiation through an object. These rays then interact with either a unique phosphor screen or flat panel detector including micro-electronic sensors. The interaction between the panel and the radiation produces a digital image that can be viewed and examined in real-time.

Computed tomography (CT) is a process that takes hundreds to thousands (depending on the dimension of the component) of 2D radiography scans and superimposes them to make a 3D radiographic image.In an industrial setting, CT can be performed in two ways. In one method, the element to be inspected remains stationary while the radiation source and x-ray detector revolve around the component. This technique is more probable to be utilized for big components. The second method consists of the radiation source and x-ray detector staying static while the component is revolved 360 degrees. This second technique is more helpful when the component is small or has a complex geometry.

Although this technology is timely, expensive, and needs a large amount of data storage, CT provides favourably accurate images, is repeatable and reproducible, and minimizes human mistakes.

Read more on :  Is Visual Inspection an Effective NDT Method?